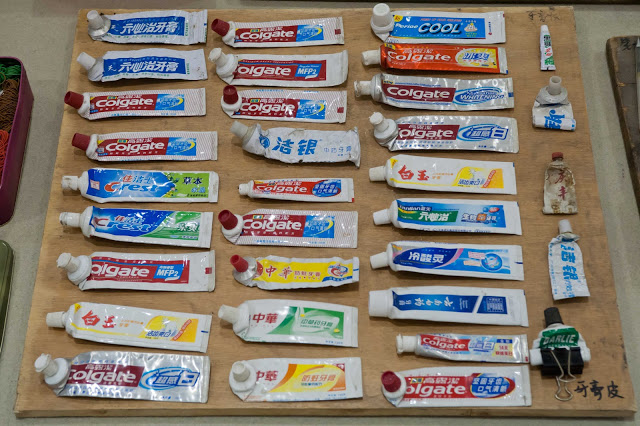 In 2009 at MoMA, the Chinese artist Song Dong exhibited a collection of objects: furniture, books, kitchen utensils, shopping bags, clothes, plastic bottles, shoes, empty toothpaste tubes; in fact, everything that had accumulated in his mother’s house in Beijing over a period of nearly 60 years.

His mother, Zhao Xiangyuan, lived in a tiny house with her husband and two children. She came from a wealthy family that lost everything when one of its members was imprisoned as an anti-Communist spy, and lived through the poverty of the 60s and the Cultural Revolution. She was obsessively frugal and refused to throw anything away, or move out and part with her possessions, until Song Dong proposed an art project to meaningfully recycle and preserve them.

The installation, Waste Not, is a time capsule of Chinese daily life, and a record of a person’s life in their possessions. It’s like a personal museum of Mrs Zhao’s life. Sorted and ordered, these everyday objects have a strange poignancy. Items we might normally discard as rubbish are treated with care and sensitivity, like artefacts of value and importance. Like memories, they are precious and stored for the future.

From Beijing in 2005 to New York in 2009 and London in 2012, Waste Not has travelled the world, a quiet autobiography of Song Dong’s mother and a portrait of China over six decades.

It makes me wonder about the things we collect and hold on to, and why. I personally like to clean out and not have too much clutter around, but I also keep items that I’m nostalgic about, but probably don’t need. When Waste Not was first produced as an artwork, Mrs Zhao exclaimed to her son “keeping those things was useful wasn’t it!” despite the pointlessness and absurdity of saving everything, from broken shoes to buckets with holes in them.

Artist View all posts by Keryn